Tombow Pencil Co., Ltd. (Headquarters: Kita-ku, Tokyo, President: Akihiro Ogawa) held the annual MONO Series General Display Contest (hereafter, the “Display Contest”) from July 1 to August 31. This year marks the 50th anniversary year of the birth of MONO colors, so it was the largest ever. The judging has been completed and the results of the 4th Display Contest have been completed.

The total number of entries for the 4th (2019 MONO Series General Display Contest) was 208 stores, a slight increase from the previous year. This year marks the 50th anniversary year of the birth of MONO Color, and the award frame has been increased by 10 awards from the previous year, and all 68 awards have been awarded.
The prize money of the Grand Prix (1 store) is enriched to 500,000 yen 5 times the usual, semi-Grand Prix (equivalent to 2 stores / 70,000 yen), Essence Award (equivalent to 2 stores / 50,000 yen), brand appeal award (equivalent to 1 store / 50,000 yen), area special prize (equivalent to 12 stores / 30,000 yen), The Excellence Award (50 stores / equivalent to 10,000 yen) was also enhanced. The total prize money was 1.65 million yen (excluding the participation prize).
We will report the top prize winners. The display contest is scheduled to continue in the next fiscal year.

[Points of the display]
In commemoration of the 50th anniversary of the birth of MONO color, we created a sales floor under the theme of “Mono Festival of Tombow Shrine”. We made it a theme that will interest a wide range of ages, called “festivals” that are familiar to children and the elderly.
I handcrafted all the props and props in mono color! All of them are powerful! In addition, the window glass of the store was decorated in MONO color. We are celebrating the 50th anniversary of MONO color with MONO from both inside and outside. 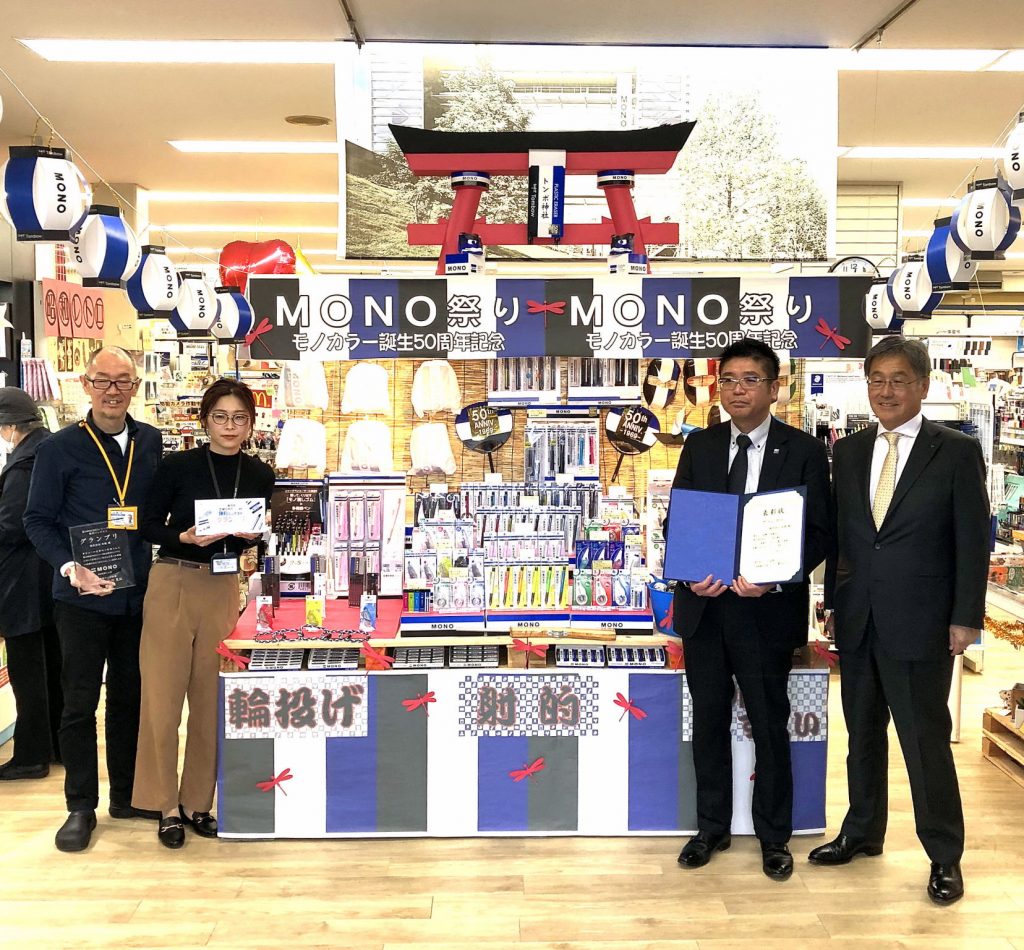 On October 17, Mr. Hitoshi Moritani, Managing Director of Waka , who won the Grand Prix (second from right), visited our company President Akihiro Ogawa (right from the photo) and presented a certificate of commendation and a supplementary prize. 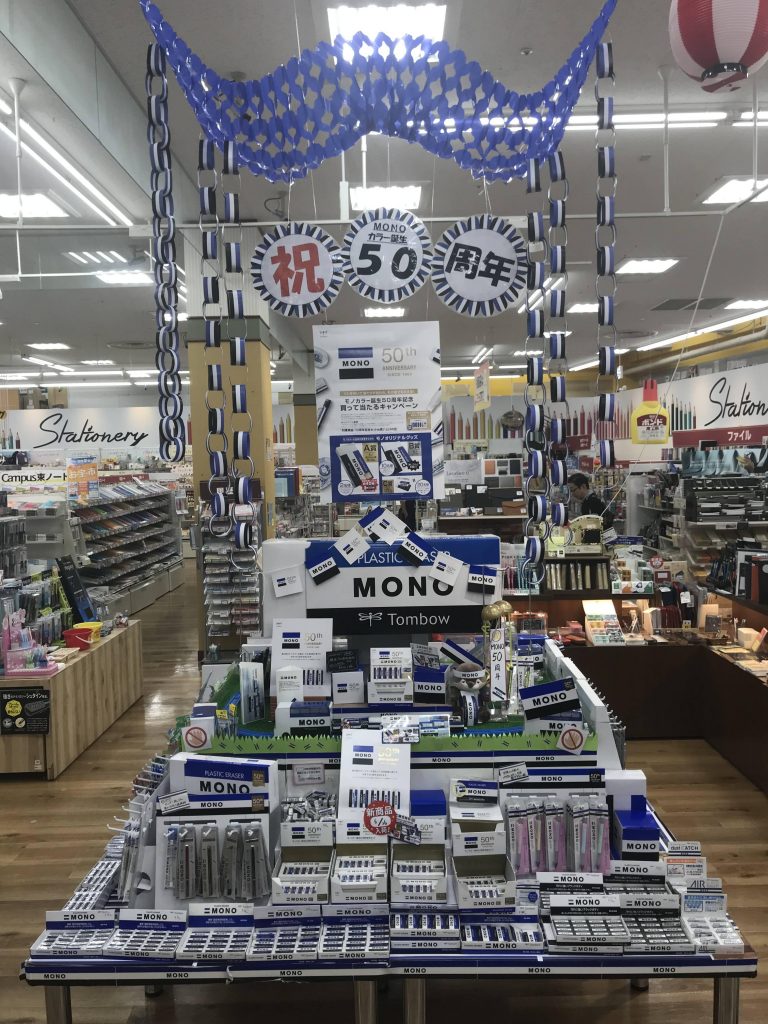 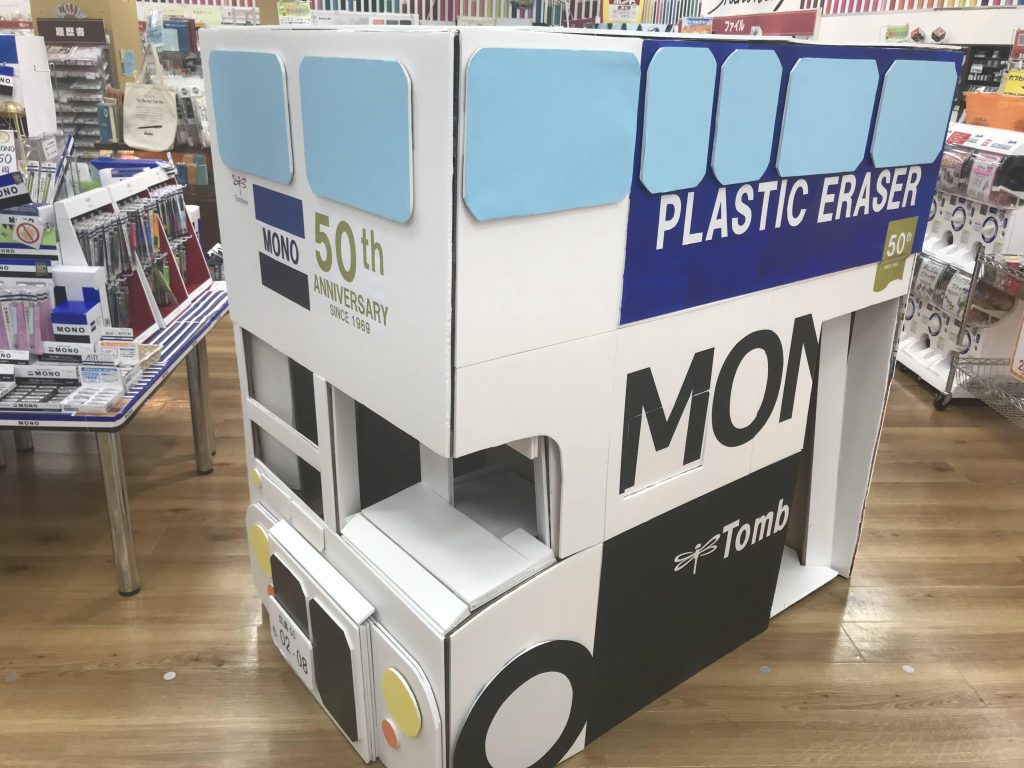 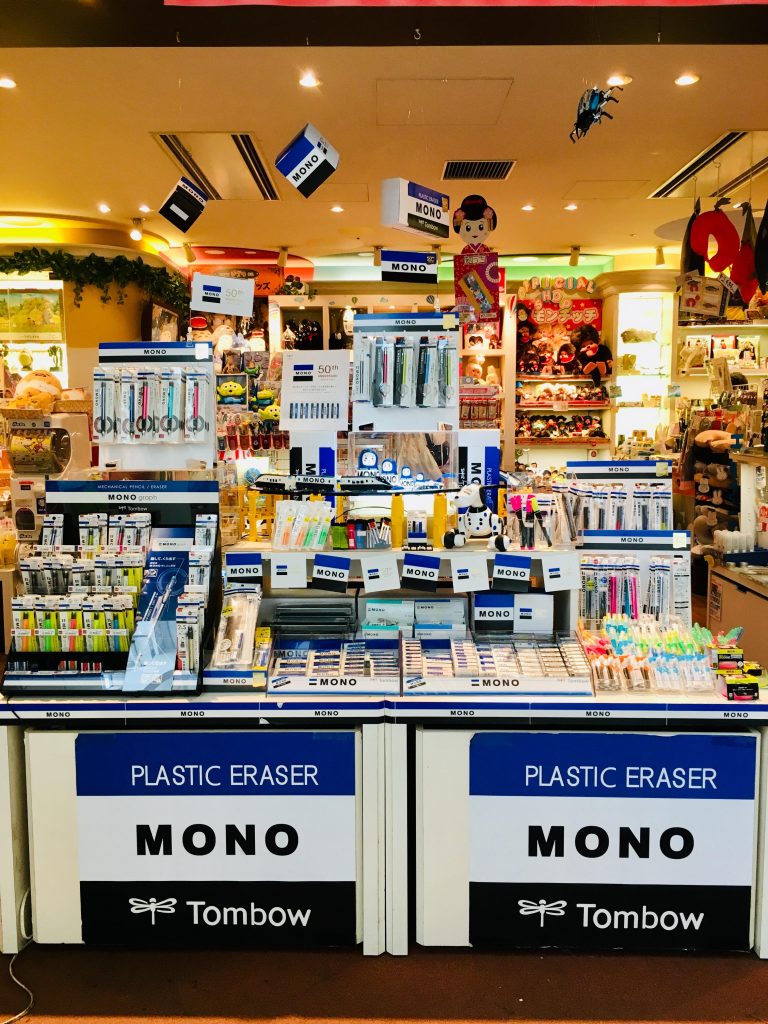 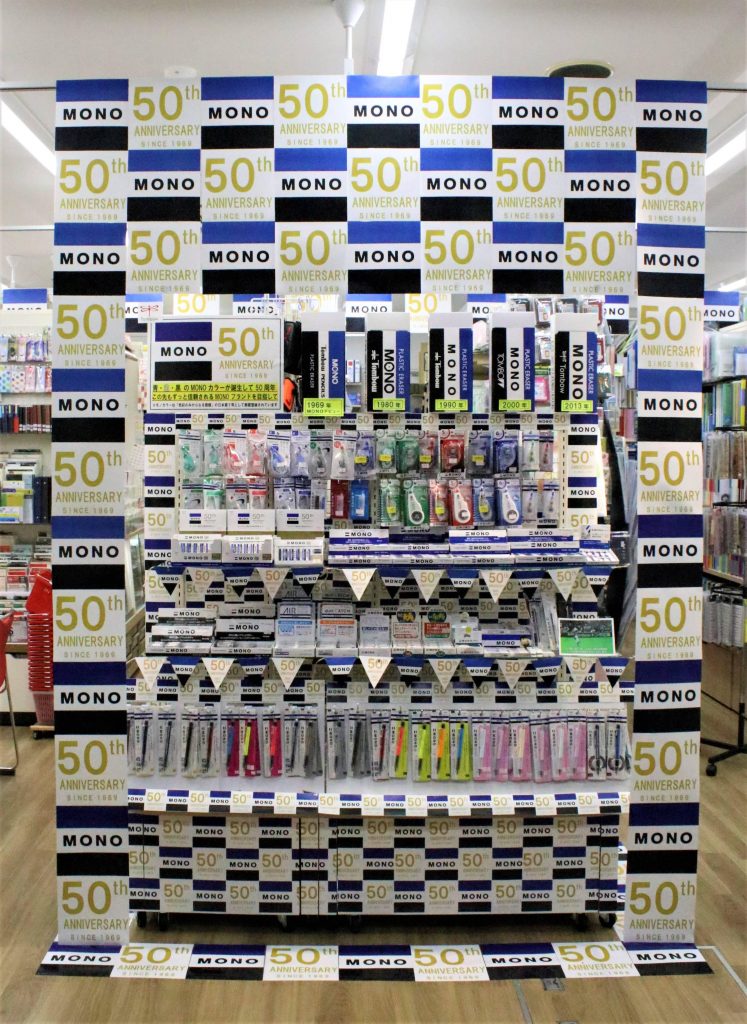 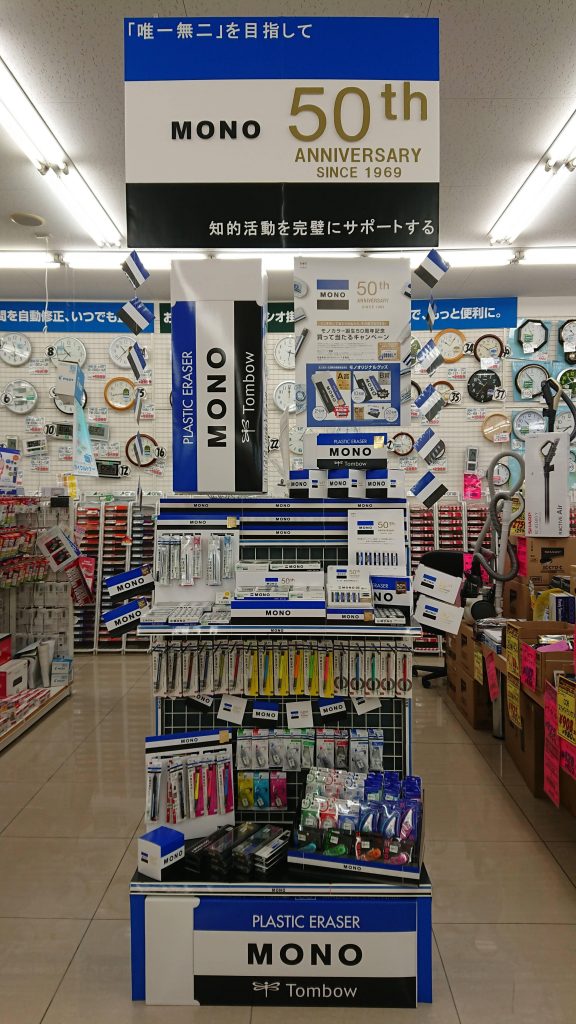 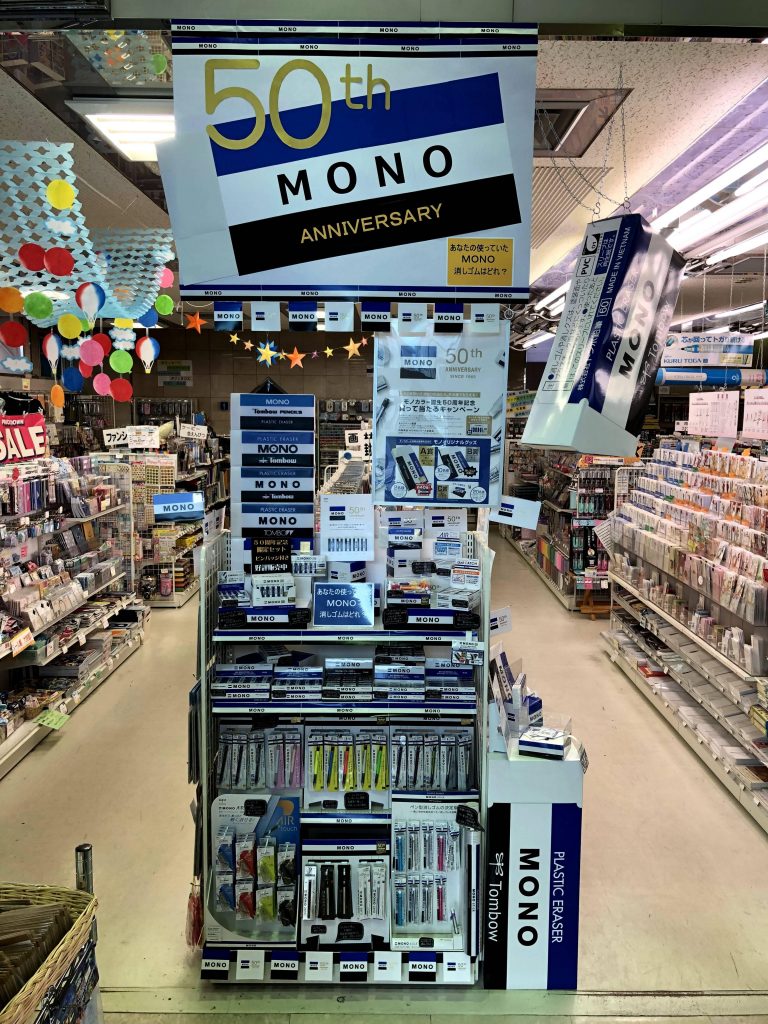 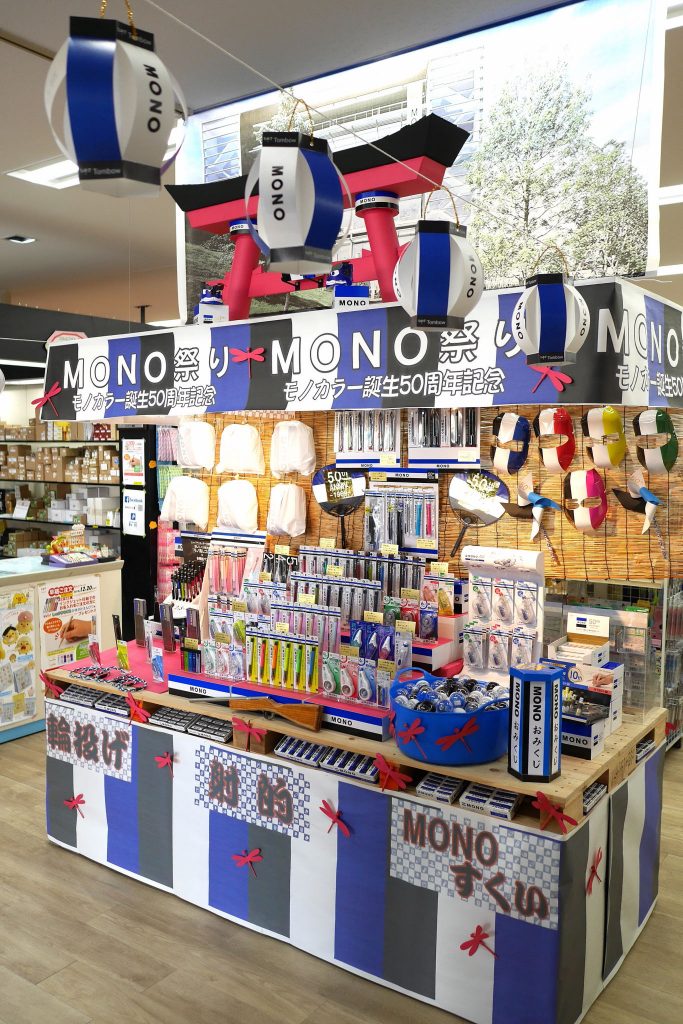 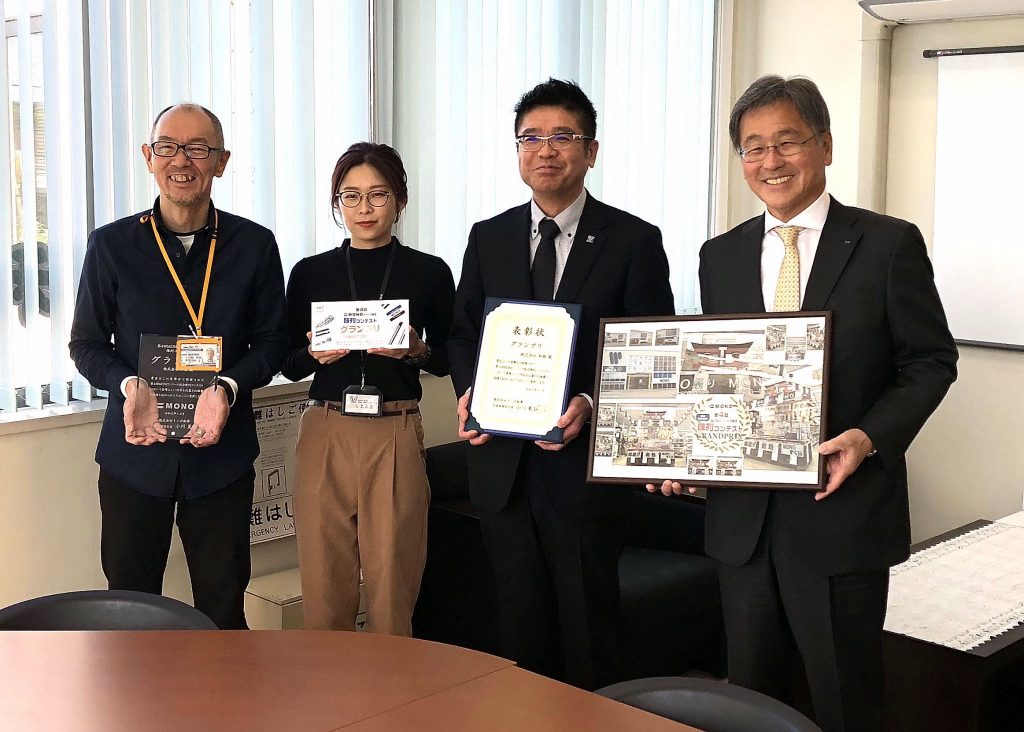 Congratulations on this time. First of all, please tell us the voice of the joy of winning the Grand Prix.
[Mr. Moritani]
Thank you very much for being selected for the prestigious award. We deal with a variety of products including Tombow products on a daily basis, but this time, when I participated in such a contest for the first time, as a result of working together other staff, mainly the manager Katsuya Waka and Yoshie Shimomichi, as a result of working together, It is encouraging to have won the prize. Although it is a small town, I think that if we work hard, our efforts will be recognized, and we will continue to do our best while realizing that we are supported by the local community.

Please tell us the customer base of your store and the customer’s reaction of the MONO display contest.
[Ms.Shimomichi]
There are many family customers, but there are also business people. Both customers have an exhibition in front of the entrance, so many people said “Wow” as soon as they entered, and I was surprised and happy to enjoy it. Sales of MONO-related products also increased significantly.

How did you participate in the display contest?
[Ms.Shimomichi]
It was a contest to commemorate the 50th anniversary of the birth of MONO color, so I participated in it. If I wanted to be a part of the show, I started to share ideas from the middle of July and it took about a month to make it. I tried to twist the theme that other shops do not have. This contest is very educational because you can also see the wonderful displays of other shops on the web.

What was your hard work?
[Mr. Moritani, Managing Director, Mr. Waka]
I thought that the appearance was important, so even if I decorated it once, I was worried about the details such as “Something is weak impact here” or “The angle is a little different” and the correction increased. As for the large logo display in front of the store, I tried to put it on the window from the inside of the store at first, but because it is hard to see because it is reflected, I try to put it on the outside while paying maximum attention so as not to be blown away by the wind, The lanterns were also developed in a different layout at first, but they changed them while looking at the moving lines of the customers. It was hard to make a lot of rework after it was made. 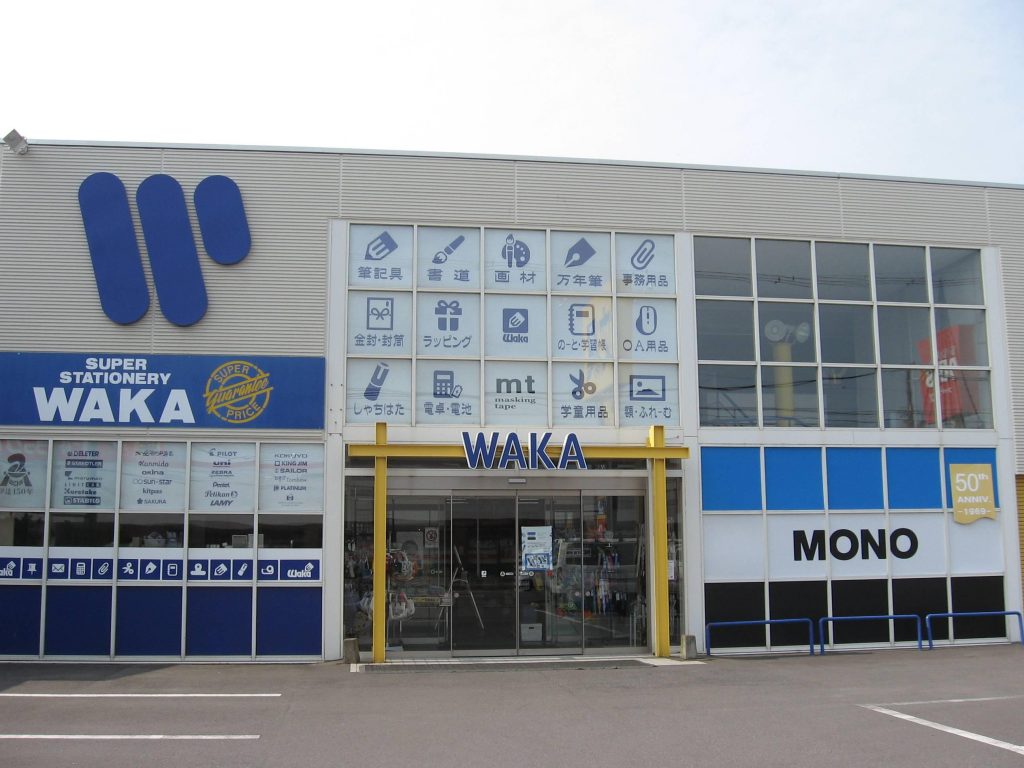 The three-color blue-white-black pattern of “MONO” of Tombow Pencil was registered as “trademark consisting only of color” in March 2017.