Tombow Pencil Co., Ltd. (Head office, Kita-ku, Tokyo, president and Akihiro Ogawa) held the 3rd MONO Series General Exhibition contest from July 2 to August 31. We will report the results.
Our company has called for stationery stores nationwide, and we have requested the design and implementation of the “MONO” brand product series in the form of “gathering, touching, understanding, and enjoying” the originality of the storefront display in a contest format. The results of the third exhibition contest were completed as a result of the application of the results of the survey.
The total number of submissions for the third (2018) MONO Series General exhibition contest was increased slightly in 207 stores compared to the previous year. The prize was 58 stores, one Grand Prix, two semi-Grand Prix stores, one brand Appeal Division award, two store Essence prize, the area Special prize (6 blocks) 12 stores, excellent prize 40 stores. The total prize was 1,150,000 yen. We will report the top winning stores.
The contest will continue to be held in the next fiscal year. 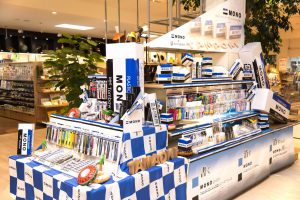 Participated in the top seat of 207 stores, “Stationery Tamaka honten” (179-2 horiike, Iizuka City, Fukuoka Prefecture) was.
from the entry sheet
I want you to see the abundance and functionality of the MONO brand again to the visitor who has come to the store, and I tried to expand it thoroughly. The image of the deployment was originally supposed to make a large ship of MONO, but after a number of trial and error, I thought that it is best to push the MONO brand to the front as well. I made it together with the staff in charge in the intention to tell the customer that there are so many kinds of MONO that I always use and there are various functions depending on the purpose of use. 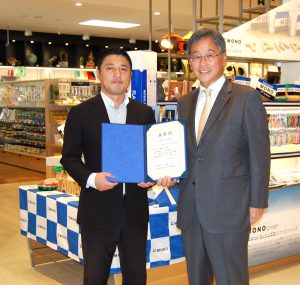 on October 4, the President Akihiro Ogawa visited the Grand Prix of the stationery that was shining in the GP, and presented a letter of Commendation and Prize to Mr. Kazuki Tamaki. 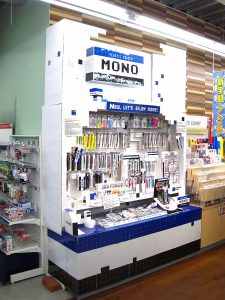 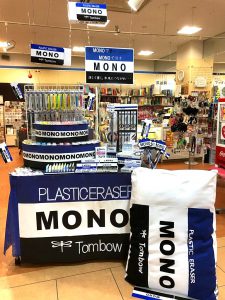 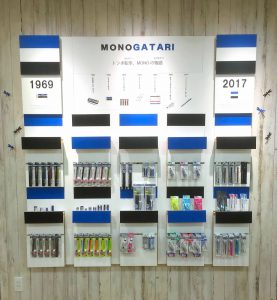 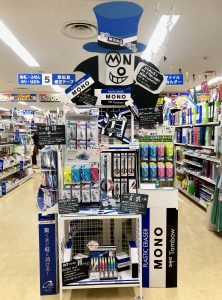 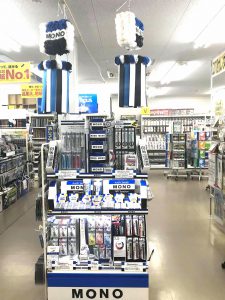 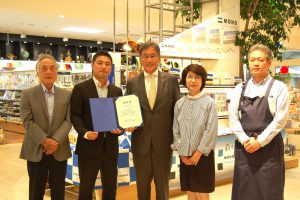 –Thank you. Please tell us the joy of winning the Grand Prix.
Mr. Tsunehiro Tamaki from the left, President Kazuki Tamaki Tombow Pencil , President Akihiro Ogawa, chairman of the Tamaki President’s office, the manager of Yoshiyuki Yuzuriha
At the time of the first “MONO display Contest”, outgrown because it was an old store, but I was invited from some of the agency, but I had given up because there is no convincing display, it became a new store last year, all of the staff ” I wanted to participate in the exhibition.
This year, I used a bigger place than last year, and I tried to display MONO blue and white as a wave, and the image of a ship.
I thought that it was boring only with a ready-made tool, and the staff who was able to do the design cooperated, and the original POP was created from scratch. The second exhibition contest was the first time to participate in the Excellence Award, “this year! I’m very happy to win the Grand Prix because I was Elan.
【 President Tamaki 】
I think it is a very grateful honor. It was recognized that the staff of the shop was able to display it very hard, and I thought that it had led to the improvement of the motivation of not only this display but also the employee and the staff, and left the good one for the entire shop building in the future.
–How did your customer respond to the display contest?

There are a lot of families with the weekend after all. The students and adults have always seen MONO, so they are familiar. I was sometimes told that I wanted POP and mock-ups that I made for display. As a custom, the customer is going to be the first to go to the standard corner many cases, it was deployed in the display and double location.
–What was the opportunity for you to engage in a store event called a display contest?

It is big that the sales person in charge strongly recommended it. After all, it was also great that the shop was growing new and I was motivated to join the staff. I was talking about the aim of the development that can be strong originality because it is good even if it takes time to participate.
【 President Tamaki 】 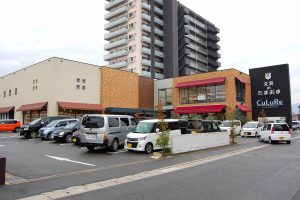 Stationery store Honten 179-2 horiike, Iizuka, Fukuoka
This is just the second year of this Sindian month. In the midst of the large sales department, we had two years of working hard while repeating the trial and error of our employees and staff. In the future, I will put my hips carefully, and I want to expand it by digging deeper so that I can tell the enjoyment of a lot of “stationery” to the visitor and goodness.

(The Listener and the report are the Tombow Pencil Product Promotion Department, Takashi Ogawa)

The blue-black and white three-color pattern of “MONO” of the Tombow Pencil was registered as the first in April 2017 as a trademark consisting only of color.