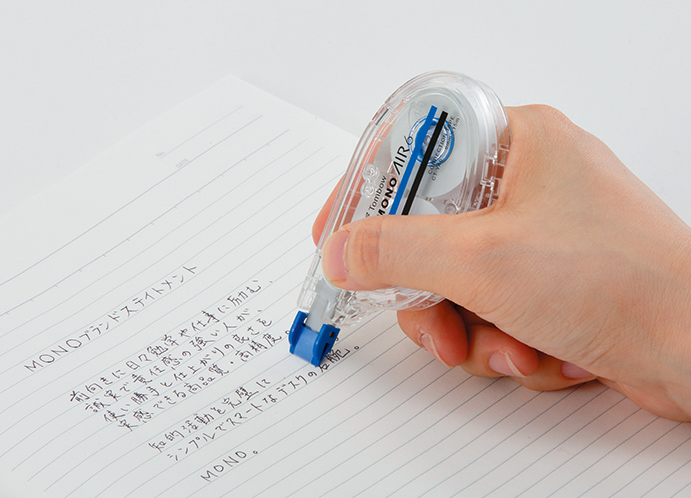 This product has three kinds of tape width 4.2 mm (4), 5 mm, 6 mm, and the length of the tape is a use-only type of 15 meters of all kinds. The suggested retail price is 324 yen for all types of tax (300 yen by tax). The annual sales plan is 500,000 pieces and 150 million yen (retail price).
This product is a feature that the “Air touch System” which greatly lightens the tape running was first adopted to the Correction Tape of the side action type , compared with the side action type ※ of our conventional product The tape drawing force at the time of use was reduced by 36% at the beginning of use (when tape 15m), and 38% at the remaining 2m.
※ Our conventional products: MONO YTC. Tape length 16m.
Because the tape can be lightly ■ from the beginning to use, it can be used smoothly even for people who have not been able to use the Correction Tape so far, ■ can be corrected with a light touch, it does not interfere with clerical work and learning, The ■ is stable and can be modified well.
In addition, the tape length of this product is 15m, the correction cost per centimeter is 0.2 yen, which is the cheapest in our use-only type.

<What is the “air touch system”?>
The “Air Touch System” is a proprietary mechanism that controls the tape running by using the force of pressing and releasing the modified head to the paper. When used, it switches to “run” and “stop” when unused. Specifically, (1) A small force (driven at 100g or less) that the correction head hits on the paper will move the arm and unlock the supply reel in the body. (2) When the head is released from the paper, the back supply reel is locked and the tape drive stops.
To control the tape running in this way, the load that was applied to the reel for the purpose of preventing sagging (force to be difficult to rotate) is not required, it was possible to lighten the tape running from the beginning to use.
“Air Touch System” was commercialized in June 2016 with a vertical-pull Correction Tape . With a favorable reputation and a 10% increase in annual rate, we have introduced this type of side action type .

Twist the tape 90 degrees inside the body and tape it from the head. It is best to modify the horizontal document to make the body lay down and pull sideways.

■ Unobtrusive, quiet operation
There is no turning sound when using. It is also suitable for use in a quiet library or classroom.
■ Stabilization pivoting tape head adopted

Even when it is pulled by a light force, the shake is corrected and the tape float is reduced. I fix it comfortably even for the first time use.
■ High adhesion tape
It is a high quality tape that is hard to scraping even if it adheres to the paper with light power and is written on tape.
Improvement of ■ Hiding power
I improved the concealment power so that the corrected character does not come out even after a long time.
■ With Head protector

The opening is fixed to the back of the body, and the head is covered after use. It does not stain the surroundings at the time of storage. It is not lost in the integrated unit.
■ Thin shape
Width 47mm, thickness 16.5 mm, full length 90mm, thin body. While adopting the “Air touch System”, the appearance dimension hardly changes to the conventional side action type ” MONO YTC”.
■ Products are ECO Mark certified products, green Purchasing Law compliant products, GPN Eco products and products. 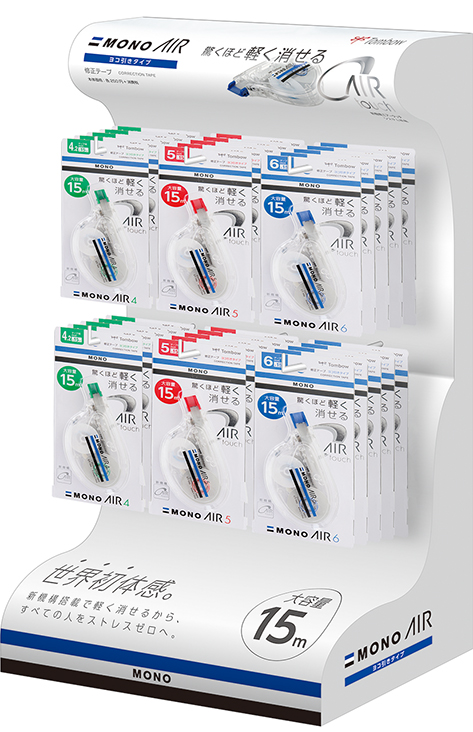