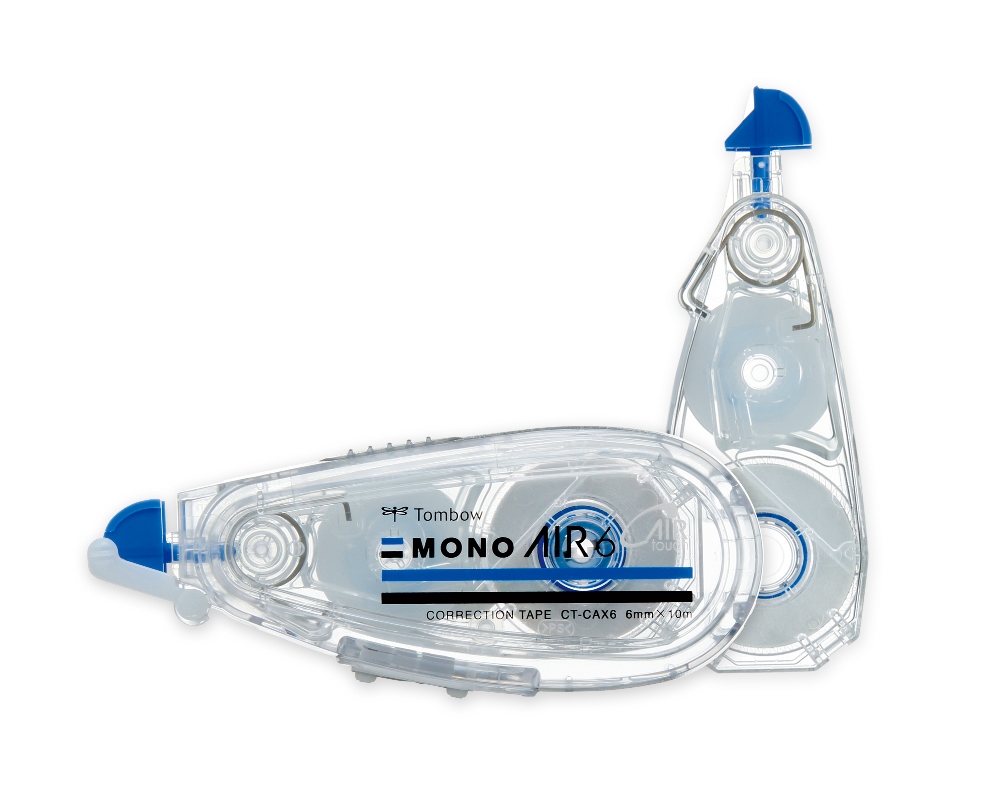 ” MONO Air” of the type of use that was released in June, 16 is popular, and will release the economical Refillable . * Our survey
The product name is ” MONO Air Refillable “, 10mm volume, 3 kinds of tape width 4.2 mm, 5mm, 6mm, body color has a standard type and color type by tape width, All types of MSRP are 324 yen (tax not included). The refill cartridge is 10 m, tape width 4.2 mm, 5mm, 6mm Three, all kinds of MSRP is 194 yen including tax (180 yen by taxes).
By changing the tape, the consumption cost can be reduced by 12% in the third, 18.4% in the fifth, and 23.2% in the tenth (use-only type MONO Air= 250 yen = comparison). Suitable for use in office etc.
This product is ECO Mark certified products (excluding color type), green Purchasing Law compliant products (color type, except replacement cartridge).
The annual sales target is 1.3 million units, 390 million yen (retail price), replacement cartridge 900,000 pieces, and 160 million yen (retail price).

The air touch system with half the pull force is mounted on the replacement cartridge.
This product sweeping improved the structure of the Correction Tape , and built the “Air Touch System” which controls the tape running. The tape drawing force is reduced by 61% (the conventional product ratio/tape quantity 10m), and the correction part is lightly traced, and can be corrected without stress quickly. In conventional products, the withdrawal force was reduced by 58% even at 2m when the tape residue was heavier (compared to our conventional products).
This air-touch system was mounted on a replacement cartridge. Each time the tape is replaced, a fresh air-touch system is used to maintain a comfortable tape drive.

The reason why the tape drawer of the Correction Tape So far was heavy was to prevent the slack of the tape when the head was released from the paper. Therefore, when the tape remaining amount becomes slight, the leader force becomes the average about 30% heavier and it became difficult to use. (Because the diameter of the reel is small). Our company calls the mechanism that the tape runs with light touch like air as “air touch system”, and displays it with the right symbol mark.

What is the “air touch system”?
The air touch system of this product is a mechanism to control the tape running by using the force to push and release the correction head to the paper. When used, it switches to “run” and “stop” when unused.
(1) Applying a slight force (driven from 100g) to the correction head in the paper, the supply reel
Unlock (bottom left figure).
(2) When the head is released from the paper, the supply reel is locked and the tape drive stops (right figure below).
This product is novel in that it is satisfied by using the mechanism which drives the usability that the confrontation is technically a light drawing power (a lightweight draw force), and the tape does not sag (heavy drawing force) by the air touch system.

Figure description
■ MONO Air has a built-in lock arm that runs full length 64.5 mm. A
■ Fix head is located at the tip of the arm, through the fulcrum, one is meshing the projection of the Correction Tape supply reel (b) (locking mechanism). The arm is locked with a metal spring and has a lightweight torque.
If more than 100g of force is applied to the modified portion of the ■ Correction Correction Tape , the correction head moves to about 0.5 mm upward. This movement is transmitted to the locking mechanism through the fulcrum to release the lock that meshes with the supply reel. The tape travels with a light drawing force which is not so far.
After ■ Fix the Fix head is released from the paper, the supply reel returns to the locked state. The tape slack does not sag because the running of the Correction Tape has stopped.

Other features of ” MONO Air Refillable “
Compact shape even in the ■ refill type
A compact body with a thickness of 22mm (maximum) of 345mm × 85mm. It fits neatly in the drawer of the desk.
■ 4.2 mm/5mm/6mm width and all kinds of 10m rolls
It is a 10m roll that can be used for a long time. The type of the refill and the vertical pull.
■ Unobtrusive, quiet operation
There is no driving sound when using. I was considerate of the use in the Office and the library.
■ Stabilization pivoting tape head
Even when it is pulled by a light force, the shake is corrected and the tape float is reduced. I fix it comfortably even for the first time use.
■ With one Touch head cover
Guard the tip when not in use. You can easily open and close the cover with one hand.
■ High adhesion tape
It is a high quality tape that is hard to scraping even if it writes from the tape even if light power adheres firmly to the space. 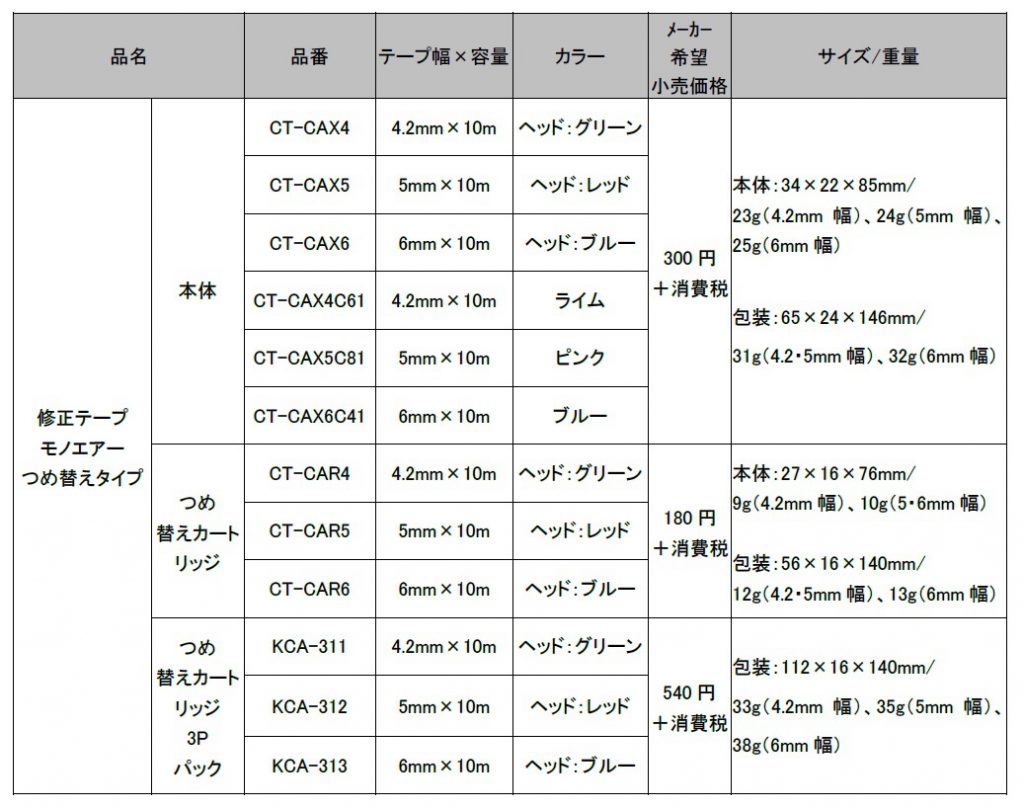