Tombow Pencil Co., Ltd. (Head office, Kita-ku, Tokyo, president and Akihiro Ogawa) held the first “MONO display Contest” for two months from the beginning of July to the end of August of this year. The purpose of the contest is to develop a store campaign for stationery shops and compete with the theme of the “MONO brand” product, which has been enhanced and strengthened with the release of the “Mono AIR”, a Correction Tape of the world’s first experience of lightness. Through this, we would like to contribute to the creation of a store where our customers can gather. The contest is expected to have a response that is beyond expectations and will be scheduled to be held as a “first” session.
The first MONO display contest, with approximately 200 stores of stationery retailers, has been developed throughout the country with a creative MONO store campaign. Based on this record, the board of judges was held in late September, and this report was decided by the Grand Prix of the first MONO display contest (one store), the Quasi Grand Prix (two stores), the Excellence Award (20 stores) and the Fighting Spirit Award (40 stores). 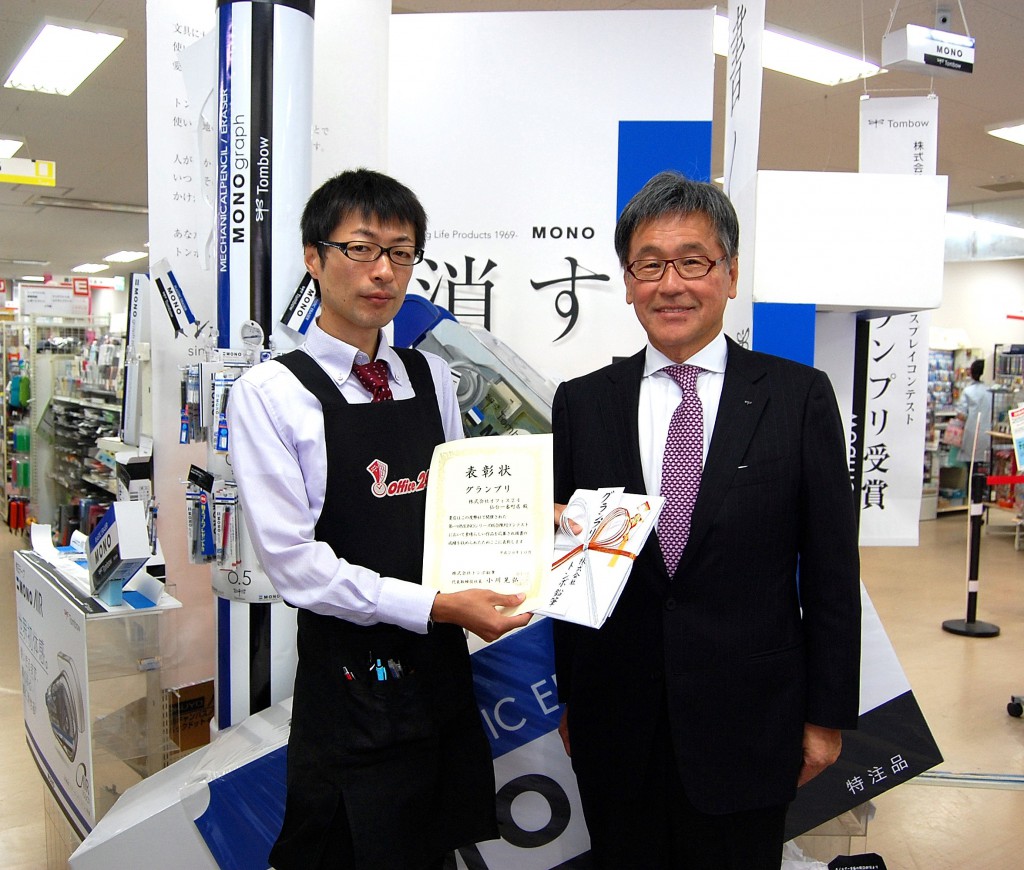 The Grand Prix was decided as “office 24 Sendai Ichiban-machi” (Sendai City, Miyagi Prefecture, Hayato Kumagai Manager). The manager’s story below =
The implementation outline is a large-scale development of the MONO special corner. The giant MONO Plastic Eraser (model) of the width 180cm of the original production and the NEW PRODUCT Mono air a moving huge model is installed as an eye catcher in the front. The big message board of “erase” and “write” directs customers to the experience corner, and proposes the familiar MONO and new MONO. This special corner is recorded by a video and uploaded to You Tube for information dissemination. We announce a scale display contest to mobilize customers.
https://www.youtube.com/watch?v=Xf51fFN5oy4
The theme of the shop is “for a new idea born by erasing”. The message from Kumagai, the manager, said, “We aimed to be a store that will remain in the hearts of our customers this summer.” The campaign started in early August.
We donated 100,000 yen to the Grand Prix “office 24 Sendai Ichiban-machi” as a commendation and prize from President Akihiro Ogawa on October 3, 2011. 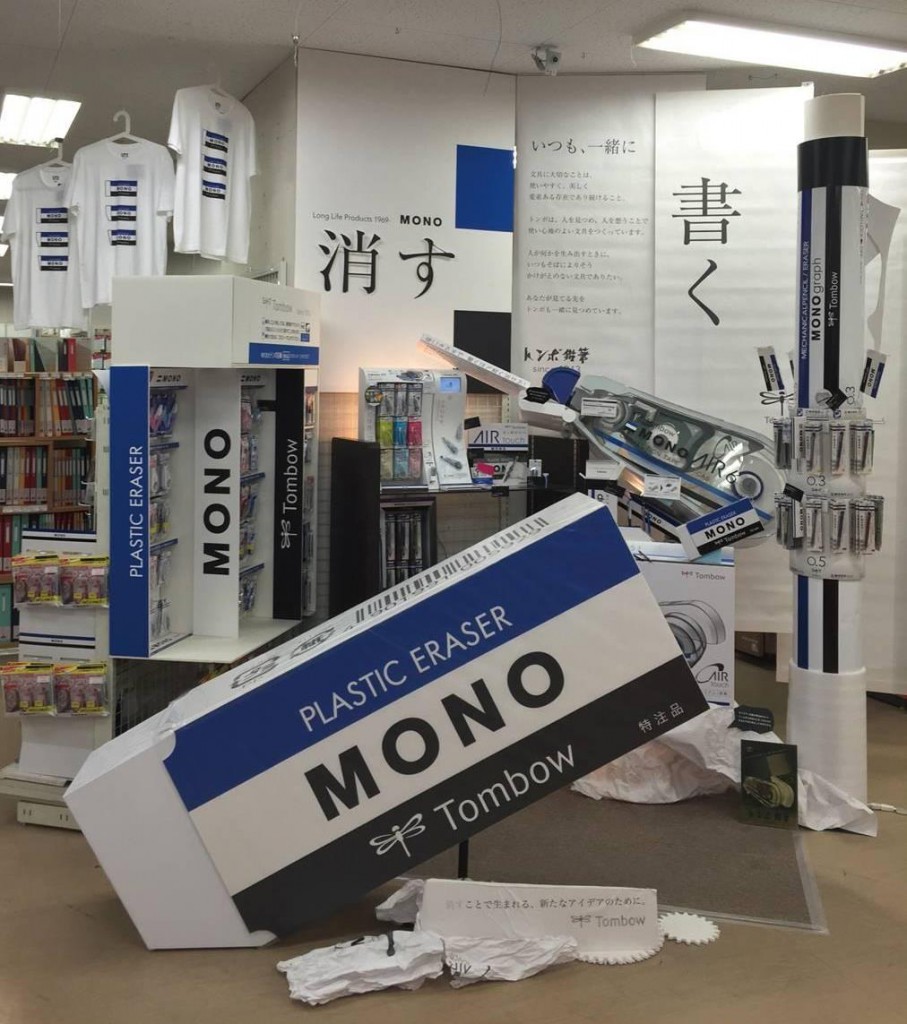 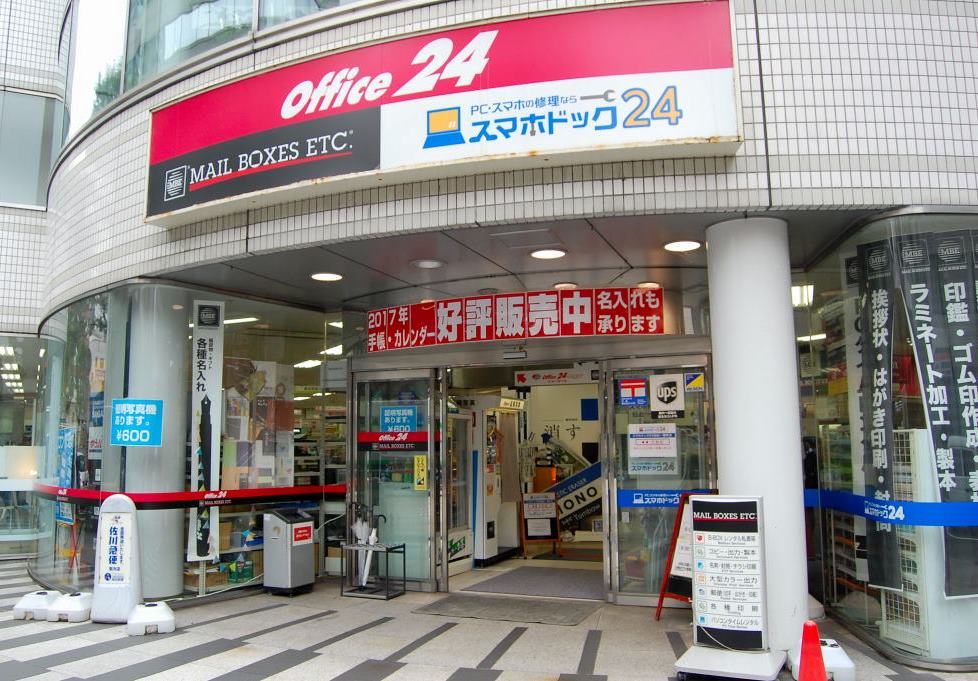 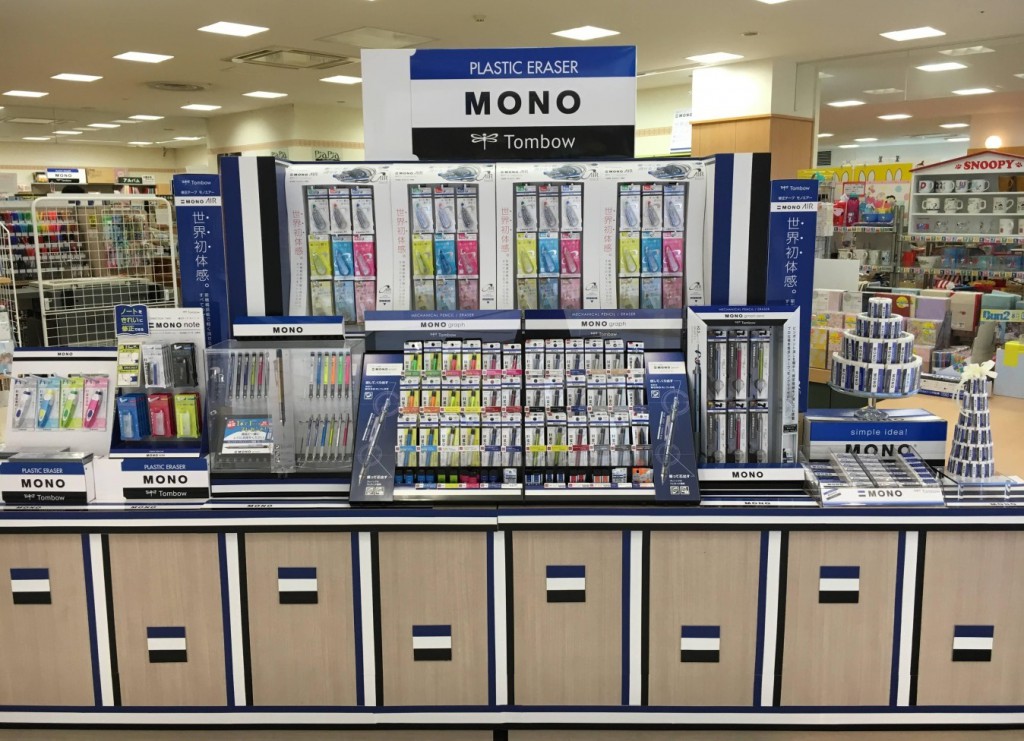 The quasi-Grand Prix was decided as “stationary peer peer” (Nagano Prefecture Higashichikuma-gun, Gujo Naoyuki).
The outline of the implementation is placed in front of the shop on the platform display of MONO products only. A huge MONO Plastic Eraser (model) is placed at the top of the line, and new products such as MONO-AIR and Mono graph series expand wide. In addition, the mono-PE series has been carefully stacked to make its own unique production, with a surprising and familiar plan.
The message of the Gujo manager is that “in the showcase, the colors and types of MONO graphs are easy to compare and display. In addition, I produced a sense of luxury by exhibiting it in the showcase. It is very popular for customers to see and enjoy. ”
The campaign started in late July.
We have donated 50,000 yen as a certificate and prize to the “stationary peer peer” which was crowned the quasi-Grand Prix. 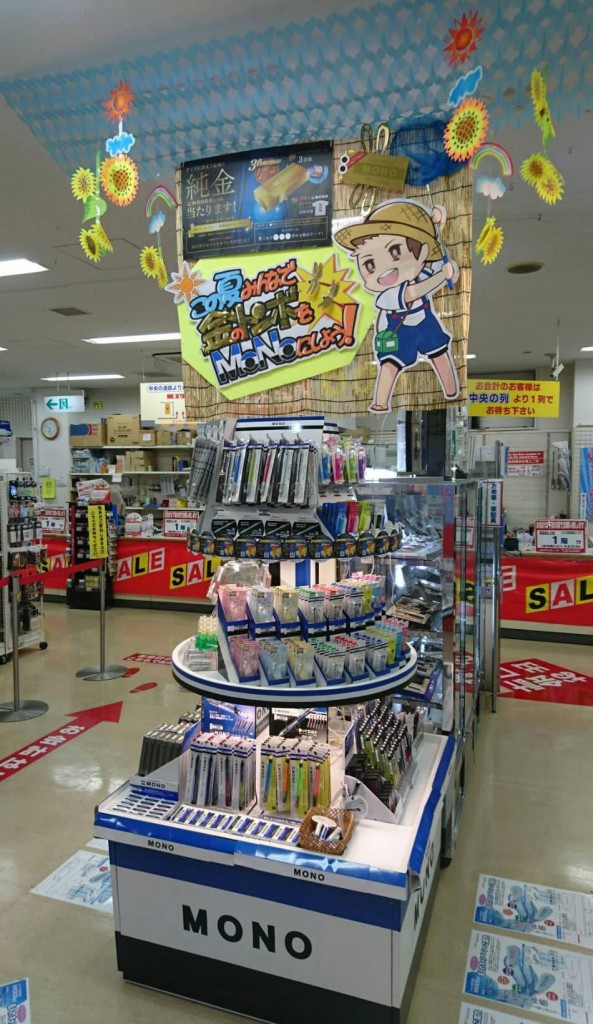 The quasi-Grand Prix was decided by “Simonjima Asakusabashi Honten” (Taito-ku, Tokyo).
The implementation outline is a special MONO corner with planning capabilities. “We’ll make a gold Tombow with mono this summer! The “MONO-kun” character is created, and the display is entwined in the MONO AIR campaign that hits the MONO Plastic Eraser of pure gold. “360-degree” MONO “! MONO brand products are displayed in the wide.
The message of Okariwa, “in order to have customers touch as many products as possible, we put samples of all our products on the stage and display them so that you can feel the joy of choosing from the comfort and variety of products.” The campaign started in mid-July.
We have donated 50,000 yen as a commendation and prize to the “Simonjima Asakusabashi Honten”, which was crowned the quasi-Grand Prix.

The first MONO display contest is a special “Fighting Spirit Award” because of the number of ambitious submissions that exceeded our expectations, and we gave you a certificate for 40 stores and 5,000 yen for gift certificates as prize.

(What is a MONO display contest?)
With the release of “MONO AIR,” a Correction Tape of the world’s first experience, the Tombow Pencil has participated in a participatory promotion to users from the beginning of June to the end of August 2016. At the same time, we conducted a long-run promotion from the end of April. The MONO display contest was held as a pillar for about two months from July.
The outline of the contest is called to the stationery store that is actively introducing the “Write/erase” product group of the MONO brand around the Correction Tape “Mono AIR” We are looking for the implementation and report of the creative MONO store campaign. (1) Sales staff will make a proposal. (2) implemented a mono brand store campaign centered on Mono air. (3) Capture the situation and post it on the Mono campaign contest site. Judging from the perspective of creativity, scale, customer perspective, and passion, we decided to evaluate awards.

-Your store has been awarded a number of excellence prizes in the display contest, but please tell us about your efforts.

Because the theme is a new product depending on the contest, I study where I want to show and where I sell. I try not to put my personal feelings as much as possible. Because there was a brand image for the Tombow Pencil , it tried to bring the Tombow design to the front so as not to disturb the image though it might do the display with the theme of the season.

-How was your response?

The thing that the customer and children were most interested in was the Plastic Eraser display. It seems that the eye catch effect was large. Many customers came to our shop. During the summer vacation, the children reacted to the big Plastic Eraser .
Sales during the exhibition period was not a big impact in the off-season of July-August, but at that time, I also feel that the customers who came to our store are coming again. Moreover, it seems that the visitor who bought it once repeats it.

-Please tell us the points that have been devised

It was easy to understand, and it was a display that I understood by a glance. There was a desire that children should react. In our store, there are a lot of office users usually, but it is made to enlarge it a little more, and there is a desire that children come into the shop, and it is good even if it becomes like going to the stationery shop of there.
When I made a model of MONO Air , I actually rose the product and put it on a trace, a print, a panel, and cut it and make it. When I created the emergency, there was also a struggle, such as the gear ratio is not fit in this size. At first I thought I would make it only in the atmosphere, but it became a pretty accurate thing when I thought to move.
I think that a lot of products of the Tombow remain for a lifetime. When I introduce the design of the Japan stationery, the Tombow Design thinks like the design which will remain finally. The point that we are making from scratch is different from other companies.