Tombow Pencil (President, Akihiro Ogawa, head office, Kita-ku, Tokyo), participated in the 63rd (FY2014) Asahi Advertising Award and the general public offering, and the results of the award were released recently.
The award, sponsored by The Asahi Shimbun, aims to uncover young creators based on the judging criteria for “new advertising proposals” that broaden the possibilities of newspaper advertising. The total number of applicants for the general public offering of this year was 1,117 points and 19 works were selected.
From among 66 participating companies including the company, the candidate who chose Tombow Pencil as a challenge was 89 people and a team (ranked second). It was four works that won the Tombow Pencil Challenge, and was the most in the selected work by the company.
Our fiscal 2014 challenge is “TOMBOW stationery brand advertising.” The winners are as follows:
Works by Yasuko Nagamatsu, Mai Yamaguchi, and Mr. Furukawa
[Selected] works by Morita Kuma-san and Mikiko Tomita
【 Selected 】 Satomi Okubo, Yoshimi Matsuminoru, Takaaki Suzuki, Teruumi Kuroda, Chikako Yoshizaki’s works
[Selected]: Takeori Toyoda, works by Mr. Hashimoto

We are very pleased that many creators selected the Tombow Pencil As a challenge, worked hard, and fulfilled many of the four works. Each prize winner will receive a certificate and a 100,000 yen prize from the organizer. 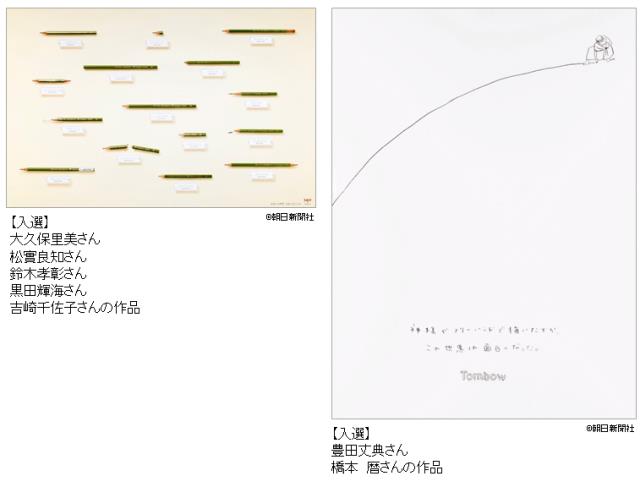